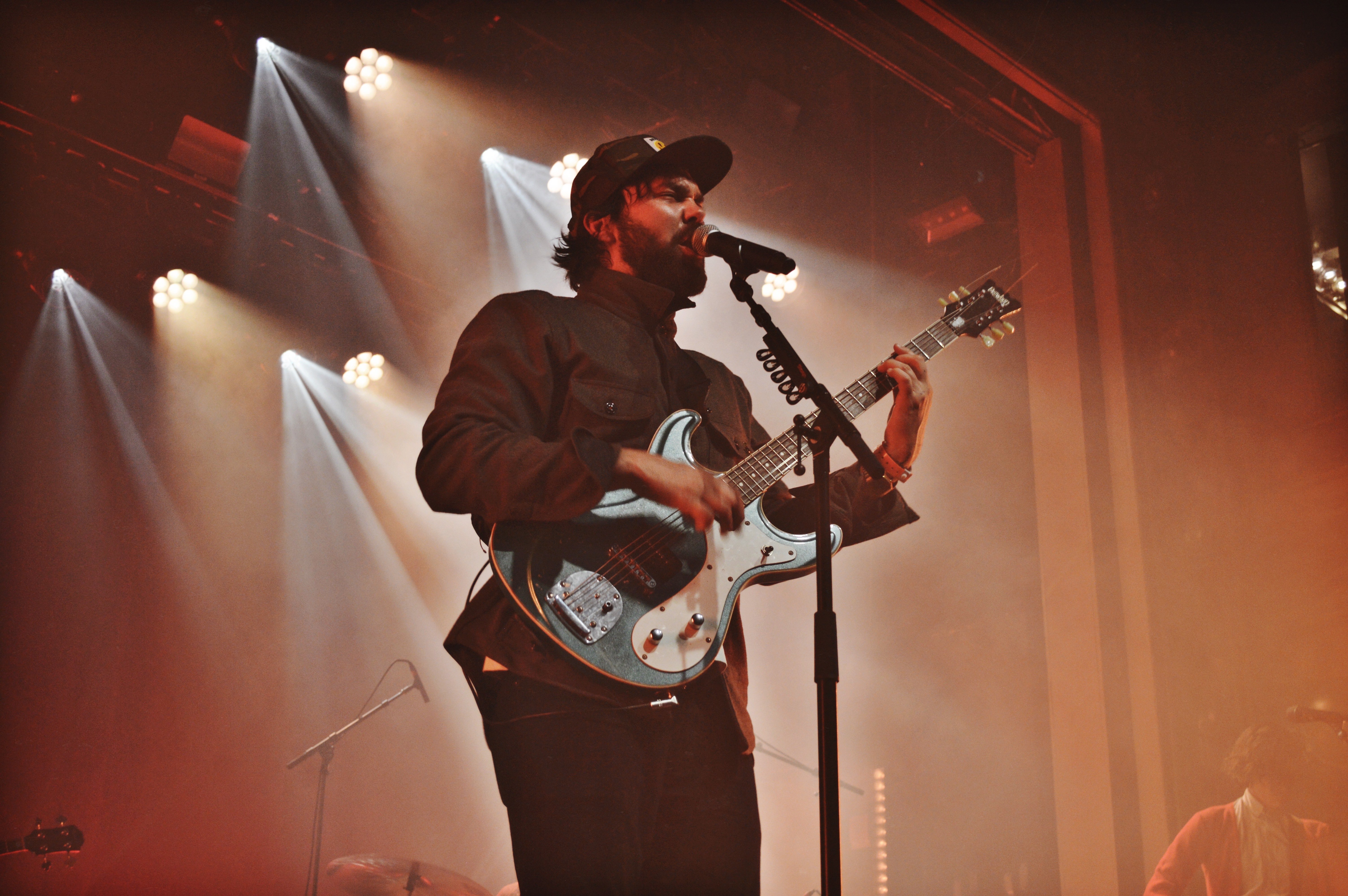 Shakey Graves knows how to put on a show, that’s for sure. We caught the Austin, TX singer-songwriter, a.k.a. Alejandro Rose-Garcia, for two back-to-back shows at Webster Hall this week. A wicked guitar player and true performer, he could entertain a crowd without even singing.

“I make music to try and express the experience of being alive for hopefully 80-100 years: how is there so much beauty and grief at the same time? What’s the point of all of this? That’s why I make stuff,” said Shakey Graves for Billboard in an interview on his 2018 album Can’t Wake Up.

Shakey can certainly make a crowd feel alive at his shows, and he’s also just plain funny. From holding the mic up against a picture of a poodle during “The Perfect Parts” to sharing stories of “Quick Monique the Freak” from his time in New York, he’s a killer storyteller. His candidness, quick sense of humor, and often absurdity almost makes the show feel like a kickback, just a bunch of people enjoying some folksy music and a beer with an old friend.

While other artists may follow a strict setlist, Shakey likes to shake things up. On Night 2, he told the crowd he was planning to perform as few repeat songs as possible, making the show a unique experience both nights. However, that didn’t stop him from playing an ode to New York, “Chinatown,” my personal favorite of his and #3 track on my 2021 Spotify Wrapped, and other hits like “Built to Roam,” “Dearly Departed,” and “Roll the Bones” twice. He played about a third of his songs with a supporting band, and tackled most of the songs alone, rotating his guitars before almost every song as he moved through his sets.

Live music has always been what keeps me going through my own struggles with mental health. When I felt like my life was crumbling as a teenager, I’d tell myself to hold out until my next show. During Covid, I lost that ability to push through by looking forward to a concert in the near future.

In a letter by Georgia O'Keeffe, she writes, “I have done nothing all summer but wait for myself to be myself again.” I sat with this quote for weeks this past summer and early fall, trying to bridge back from the disconnect I had been feeling over the entire course of the pandemic and probably before then for quite some time. Shakey’s performance at Green River Fest in Massachusetts was my first concert since the start of the pandemic. I drove from my grandparents house in Connecticut to this small western town, Greenfield, up by Vermont to see him play at the end of August. Funnily enough, I already had a ticket for the December 12th show in New York, but the Delta variant was picking up and I was so scared that Covid would shut down the city again before I got to see him live or go to a concert at all. I had asked friends to come along but was met with disinterest and questions as to who Shakey Graves even was, and why I wanted to drive so far to see him. I kept thinking, “In the pursuit of myself! What don’t you get?”

Thankfully, having to go by myself didn’t deter me from driving up for it; the festival was electric. I’d been to concerts on my own before, and they always seem to have a profound impact on my sense of self. When I go to shows alone, I’m reminded that there are still new people to meet and new people to love and new people to talk to once and then never again. The camaraderie there is a form of recognition: I see you appreciating this, and so am I, so therefore I appreciate you. You exchange a glance, or a few words, or maybe your whole life story, and temporary people make the pit in your stomach a little less hollow till the music ends. Through these exchanges, I can find a way to find life beautiful and easy and full, even through the hurting and emptiness and confusion, and perhaps find parts of myself I’ve lost.

The two shows this week, which I first attended with my sister and next alone to shoot for Sounds of Saving, allowed me to circle back to those feelings of connectedness and growth I experienced in August. So much has changed since then, as the world has opened up and face-to-face interaction is returning to the norm. There was definitely a difference in the crowd compared to when I first saw him in August, especially during the second night – maybe less openness to sharing these moments together as we move further away from peak quarantine. Granted, the first night was sold-out and a second show was added due to popular demand; sold-out shows tend to gather more hype than otherwise. Shakey’s energy was more radiant on Night 1, bouncing back off the crowd’s excitement and cheers. Nonetheless, he did not disappoint on either occasion, and the difference in the set-list made it worthwhile to go two nights in a row.

At the show in August, Shakey told the crowd that it’s the dumbest shit that goes the longest way, or maybe it was that the dumbest shit lasts the longest or sticks around with you, something like that. I guess what he said wasn’t so dumb because I can’t seem to remember it. At Monday’s Webster Hall show, he said to “do stupid shit and make good decisions.” I think I’m going to keep taking life advice from Shakey Graves, because if doing dumb shit means I’m driving alone to Massachusetts to see one of my favorite artists perform and chatting with every stranger I meet, or that I’m covering his show by myself on a Monday night during my college finals week, I guess I love doing dumb shit.

Shakey was joined by S.G. Goodman, a “Kentucky farmer’s daughter,” who will be continuing to play with him for the remainder of his shows this month. View the rest of their tour dates here.