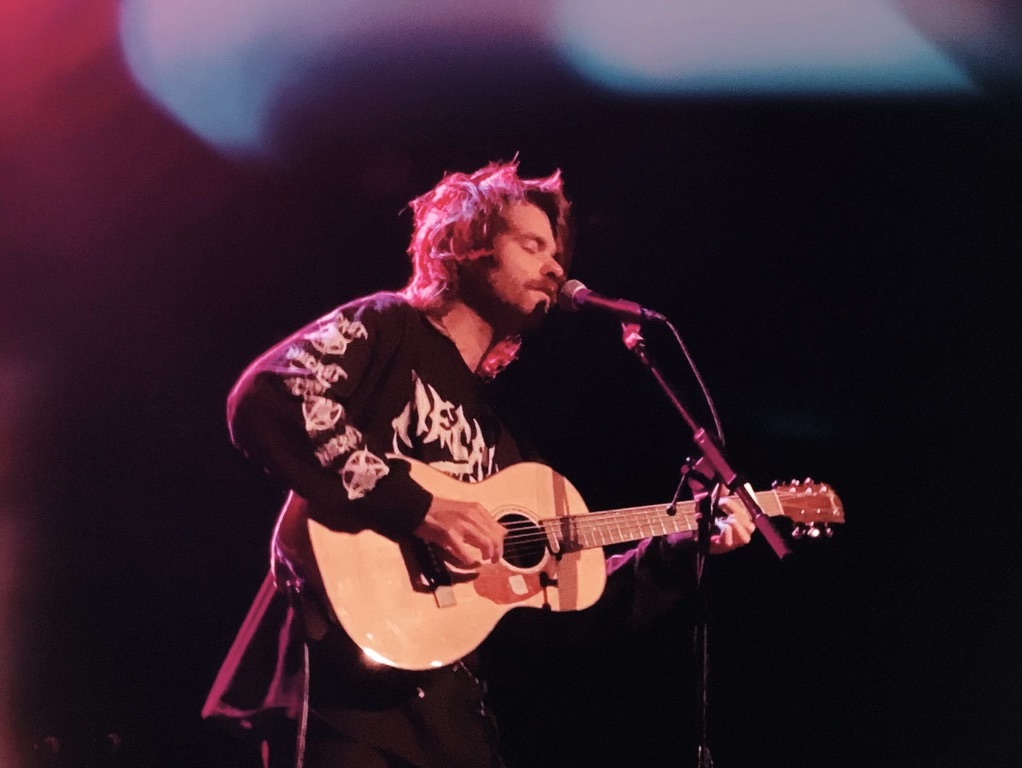 Around 11:30pm on a Friday night in Brooklyn, Kevin Patrick Sullivan, better known as Field Medic, is standing in a group of friends and fans, with a cigarette in his right hand and a small pizza box in his left. He’s just performed at the Music Hall of Williamsburg with Adam Melchor, where he played solo with only a guitar, harmonica, and a cassette tape for his backtrack from a boombox onstage. Nonetheless, his music filled the room as the crowd sang along to his popular tracks, “camomile”, “uuu”, and “used 2 be a romantic”, and raved when Rich joined him for “song i made up just now to stop myself from having a panic attack”. Despite being a folk artist, Field Medic draws inspiration from other genres, like metalcore, which is seen in his vulnerable and emotional lyrics.

We were lucky to catch Kevin for a few minutes after the show to check in on how his mental health’s been holding up on tour, and to talk about how his experiences with mental health and addiction have influenced his music.

Sounds of Saving (SoS): Did you always think you would use music to [talk about mental health]? Do you find it as a way of escapism or as sharing the message more when it comes to mental health?

Field Medic: It’s like the only thing that will make me feel good, like I can talk about [mental health]. When I’m feeling spooked out or anxious, I just start playing guitar and singing. It’s been a way, it’s always been a way, even before I had a career in it, to get those feelings out.

I didn’t think I would ever be leading the charge on speaking about mental health, necessarily, but it’s never been something that I was afraid to talk about. I feel like the more candid I am in my songwriting it seems like more people connect to the song. So just through the years, seeing that happen it’s like, I’m not as afraid to expose how I’m feeling because I don’t think somebody’s going to punk me or something. The more likely result is just like, “Dude, I've never heard anyone say that and that’s really helpful.”

SoS: In recent years people have been more and more comfortable talking about mental health, and when you can see someone else being vulnerable about it, either on a stage or just in their music that they’re sharing with everyone, it helps other people know that it’s okay to go through things and it’s okay to talk about it.

SoS: In your interview with Atwood Magazine, I read about how difficult it was to work towards sobriety while constantly being surrounded by partying on tour. Covid was a double-edged sword because you’re away from that, but you’re also in isolation which has so many effects on mental health.

Recently, I was talking about people finding a sense of purpose during Covid through spending so much time alone with yourself. Has that affected you or been reflected in any music you’ve been working on lately, and how has returning back to touring maybe changed that?

Field Medic: I think that in the tour lifestyle it’s definitely difficult to stay sober, but I was at a point a couple years ago where I was hella sober on tour, and then I was also of course like hella sober in real life. But then when Covid happened, I had started drinking on the tour that I did before that, with the intention of stopping drinking when I got home. But then when I got home, it was like … all this weird shit was happening. So I was just drunk for like seven months straight, and then I got sober again, in the same timeframe of Covid, it was still lockdown. I kinda found a new meaning, theoretically, but then once I got on this tour I just started drinking again. I don’t know, it’s really hard to not drink on tour, that’s all I’ll say.

SoS: In general, with mental health it comes in waves. There’s ups and downs like with any process.

Field Medic: Yeah, because you can be going through something secretly that makes you want to drink, and it’s something that people around you may not even understand. That’s the case for anything mental health related, sometimes you’re going through something in your personal life that doesn’t affect your day but affects your mind, and although I know that being sober is a smarter thing to do, sometimes you just need to press the relief button and turn off your higher brain. Especially on tour, I straight up don’t do anything all day, if I’m spooked about something I’m just sitting there thinking about it all day. If I go into the green room there’s a fridge full of just twelve beers, I know if I drink like three of these beers, I’ll probably be a little more chill.

SoS: When you get spooked about life on tour do you funnel that into music or is it just like, you’re walking around spooked?

Field Medic: I don’t really write music on tour because it’s just go-go, so I’m just walking around spooked. I’ll stand outside the venue, thinking, hoping everything is chill – and it usually is – but sometimes internally it’s not chill.

SoS: Sometimes when you’re going through something but it’s a private struggle, not talking about it can feel more consuming. How do you deal with those feelings when you’re on tour?

Field Medic: I honestly, I don’t have an answer for you. I have talked to some people; I had a therapist for a while but it didn’t work. She was a psychoanalytic therapist, so we would just start the session and she would just look at me like – uh? I’m the kind of person who will pretend everything is chill until someone is like, “Are you chill or no?”, so I need someone to pry it out of me.

If I’m going through something secretly and I’m on tour, I’m just me in the van with Adam Melchoir crew, who are amazing people and we’re all friends, but we’re not hella close friends. I’m not gonna be like, “Dude, I need to disclose this fucked up thing to you,” so I just suffer through it, secretly. I’ll text my girlfriend and friends at home, but there’s something very isolating, physically, about being on tour. I’m in some greenroom in Detroit just like in my thoughts, and there’s no one around I can confide in, since I’m not trying to dump some shit onto people I don’t know.

SoS: Yeah, and it’s hard too having just that feeling of feeling lonely in a room full of people.

Field Medic: Oh yeah, that’s the ultimate feeling of being a solo artist. I play the set, and people clap and it’s amazing, and when I’m playing, I feel so good, but then I go offstage and the headliner takes the stage and I’m literally in the greenroom by myself. It’s emo, it’s honestly emo. I’m alone, I'm just a guy! Especially when I’m having a hard time, secretly, what can I do? You know what I mean?

SoS: Yeah, I get that. My last question – more of a fun question – I read that you love metalcore music. Do you draw from those hardcore metal lyrics and angst for your own vulnerable lyrics?

Field Medic: I don’t know if it comes through in the lyrics specifically, but just the energy of it. Even in an escapism way, it’s like, hella important.

We pause for a moment; his friend comes over to give a warm goodbye. They share a strong embrace before he continues, I think it’s just the energy, when I listen to hella fucking violent music, it makes me feel relaxed.

Field Medic: Yeah, you know what I’m saying. My music is not screaming, it’s more sensitive. I don’t know if it comes through in my music, but for me as a person it’s very helpful to have that.

SoS: Do you ever want to just scream onstage?

Field Medic: I do, but to be honest I lost my scream. I used to be in metal bands in high school, and then when my voice changed … and also I started smoking all the cigs – I don’t know who’s the culprit here, but I killed it and I can’t scream. That’s why I started folk music. I used to be a straight up metalcore vocalist and straight up lost my scream. I’ve been devastated since I was sixteen.

Field Medic will be playing one last show with Adam Melchor at the Velvet Underground in Toronto later this month before heading abroad to open on Beach Bunny’s UK/Europe tour next Spring. He’s not an artist you want to miss, so we suggest buying tickets while you still can. You may even find him howling on stage during his song “do me a little dope”.

If you’re struggling with your mental health, help is available. The National Suicide Prevention Lifeline provides 24/7, free and confidential support for people in suicidal crisis or emotional distress. Call 1-800-273-TALK (8255) to connect with a trained, caring counselor.