Marina Herlop finds the balance between danger, discomfort, and stillness 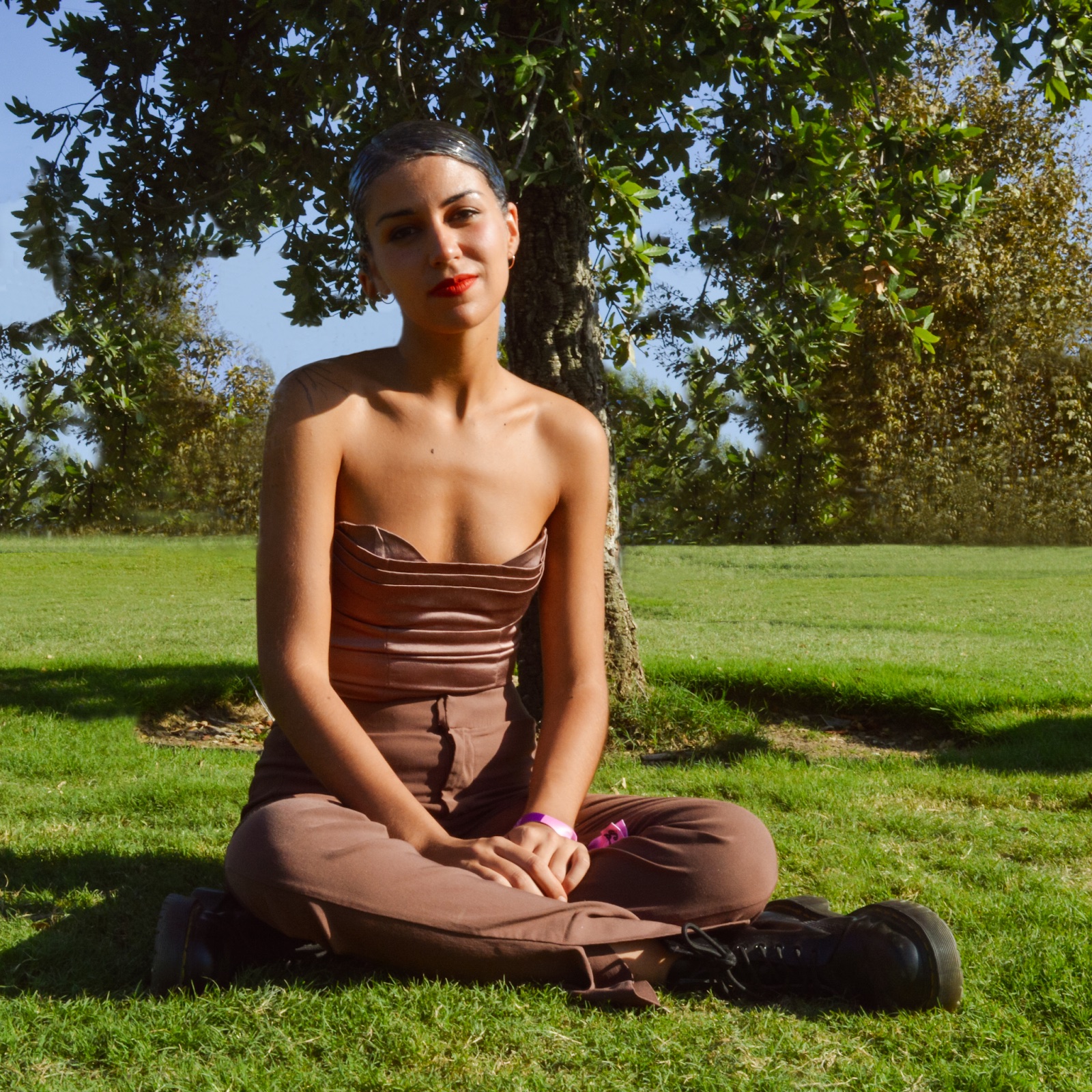 Listening to Marina Herlop’s music is like entering an alternate universe – one filled with immersive drum patterns, occasional electronic embellishments, and chilling vocal manipulation, all driven by vast piano backings. The 30-year-old Catalan musician – whose real name is Marina Hernández López – is a classically trained pianist and experimental composer. Herlop recently released her third album, ‘Pripyat,’ her most adventurous work to date. The tracks on the album feel all-surrounding, like she’s pulling you further and further into the unknown.

We sat down with Herlop after her set at Primavera Sound LA for a discussion on music and mental health, diving into her creative process, the slowness that comes after your twenties, self-criticism, and the risks and rewards of daring to be dangerous with your work.

SoS: I read a bit about your creative process and how you grew an appreciation for discomfort from finding sounds that were uncomfortable. When you create music, how do you lean into that discomfort, and how does that help shape what you're trying to create?

HERLOP: First of all, I only get to think about this stuff when I'm asked about it, because when I do it, it's not a very conscious process, or it doesn't necessarily have to be like a conscious process, you know. Like, doing it [versus] reflecting about it and then knowing what is happening are two different things. When something is correct or sweet or pleasant ... when it's too much of those, it's not that interesting, you know. When you, for example, go on a trip or are meeting someone, when there's a little bit of danger, that makes the situation more adventurous or sexy. I don't know how to say it. Like, if something's too sweet, maybe you lose interest. So for me, it's like two sides. Like, the sweetness, charm and comfort. And then there's the dark side, like dissonance and noise. So I feel like I'm going in between those, and I have to find a space, like a path or a river, in between those, that to me feels like it represents me. Or, not that it represents me or anything, but in which I feel like I like this, but it's not too beautiful. But it feels sexy, you know? It's not "sexy, sexy," but I don't know how to say it. It’s sassy [and] a bit risky in that regard. I think throughout the years this path for making music has been getting narrower and narrower. Like, at the beginning, I was less picky. But now I feel like anything is easily too cheesy, or too easy to listen to. It's a very, very narrow space that I want to navigate. So it's not an easy process to make the music, but here we are.

SoS: With what you've been creating lately, do you feel like you've been able to hone into that narrow space or are you still heading in that desired direction?

HERLOP: I feel like all the music that is out, especially the music that we perform, accomplishes this purpose. But I haven't been making music in quite a while because I've been touring. So, I'm actually scared for the next time that I sit down and stop and make music again because I know that every time [I start to make music] I'm more and more demanding and more and more picky and more and more strict. If anything, I've lost skills because I'm not practicing. So how am I going to satisfy my more demanding criteria? If I'm the same person, you know? It's like, I need to grow my intelligence, which is impossible.

SoS: Well, it's not impossible!

HERLOP: But you have to put in a lot of effort. Every time it takes more effort, but I'm ready.

“You have the possibility to create a moment, it's like time stops and we are all focused on the music. We get to have a rest from our daily lives and concerns. It's like another realm of reality.”

SoS: You've been on tour since the end of August and will be heading home tomorrow. How does it feel being done with tour?

HERLOP: Weird. Like, [halfway through the tour] when I had been on for like 10 days, I started to lose reference of my home. Like, it didn't feel like I was out from somewhere. I was just out. But tomorrow I'm going home and I don't even know if I want to. I could go on.

Whenever I'm in Barcelona, you will probably find me at home. I mean, I'm always there. I'm like a hermit. But now that I'm out, and I've been out for a while doing something that I'm meant to do, it's going to be weird to be back home. Like, what do I do now? You know, because here my worries are very low in the Maslow pyramid. Like, ‘What do I eat today? Where do I sleep? When's check-in?’ It's not like, 'Oh, my feeling of existence?' No, no, I'm not having those kinds of worries on tour. In a way, it's nice, but I'm a bit concerned about being back and locked in my house, because I know that the quality and kind of thoughts that I get are going to change.

SoS: And the thoughts that come to mind get more stressful?

HERLOP: I don't know. To be honest, I have the feeling that I'm becoming a happier and happier person. Like, especially in my late 20s, and now that I'm 30, it feels more balanced in here. So I don't think I'm going to be depressed or anything, like something really bad would have to happen for me to feel depressed. Also, the release of the album, all the gigs that we're having, and the energy and feedback that the people are giving has been very, very rewarding. So even though it's stressful to travel, that helps a lot. It gives me a lot of energy to keep going.

It's like a portal has been opening lately. I hadn't actually done that many gigs [before], and I was very concerned about how was I performing or if I was fucking up. But now that I'm getting to perform more, I'm focusing more on the people, like on their reactions and interacting with them. And it's very, very beautiful to see that you are doing something and they are liking it. You have the possibility to create a moment, it's like time stops and we are all focused on the music. We get to have a rest from our daily lives and concerns. It's like another realm of reality.

SoS: You said that you've been getting happier and happier, which is awesome. But is there ever a comedown for you after a tour?

HERLOP: Um, I'll let you know, like in a week. But I think that with this job, you have to be prepared for the ups and downs and know how to make things more relative. You need to compress the sound wave, so the ups are not that up and downs are not that down. When something goes wrong, you cannot believe that it's a disaster. I think it has to do a lot with ego. If the focus is on yourself, then you get drunk on this ego thing, and when it's when it's very good, you believe that you are very important, and when it's not, you believe that you suck and that you shouldn't be doing this. But if you focus outside of [your ego] and perform a gig that was maybe not the best, you can just think, 'Okay, we didn't have the best experience.' Or, if you got a very good reaction, you'll feel good because the music reached the people, but it's not like, 'Oh yes, I'm the best!' It's never gonna be up forever, so when you come back from tour, there's going to be a feeling of disorientation and everything is going to feel weird. But I think that you're gonna feel more stressed out if the focus is on yourself. But if it's not about yourself, I don't feel it's going to make you feel very bad.

SoS: Yeah, you're saying to let the focus remain on the music and the art that you're bringing to people, and focus less on the high of touring.

HERLOP: Yes, less about your life or your career or your success. Because that can hurt, if you take things too personally.

SoS: Is that something that you've had to learn as you’ve grown?

HERLOP: Totally. I think the first sparkle that made me go into music was very egoless. But then, I don't know, I think that for anyone in their early 20s it's very easy to focus a lot on your life. 'What am I gonna do? How am I? Am I likable? Am I successful? Am I talented?' And then as you get older, you don't care that much anymore. Like, you start to think, 'I'm young, but life is not endless. And so I better enjoy every moment.' Of course we all have ego and vanity and everything, of course. I'm not Buddha or anything, but yeah, it cools down. It stops being as intense.

When you make music, it gets to your emotions a lot. If you're very self demanding, it can be a bit dangerous because it's difficult to fulfill what you wanted from yourself. But with time you learn how to cope with it and make things relative again. It's like being two people, like, the one that asks for the music and the one that delivers it. At the beginning, for example, I hated myself because I couldn't make the music as good as I wanted it, or I hated myself because I was too hard on myself. But when you've been there a few times, you already know that it's going to pass.

SoS: When you get past that feeling of self-critique, do you feel like creating music does help you with your mental health?

HERLOP: Music has helped me so much. You know the thing of ‘music heals’? It does. Music has helped me change my personality and accept myself as I am. I mean, there's no other choice. Also, this thing of taking the best out of things and enjoying as much as possible. It's about having a positive energy onstage and trying to give that energy to people. I am very self-critical and I want to make things perfect. I'm very tight, a control freak or whatever. But then, you also need to turn that off for a second and focus on the energy.