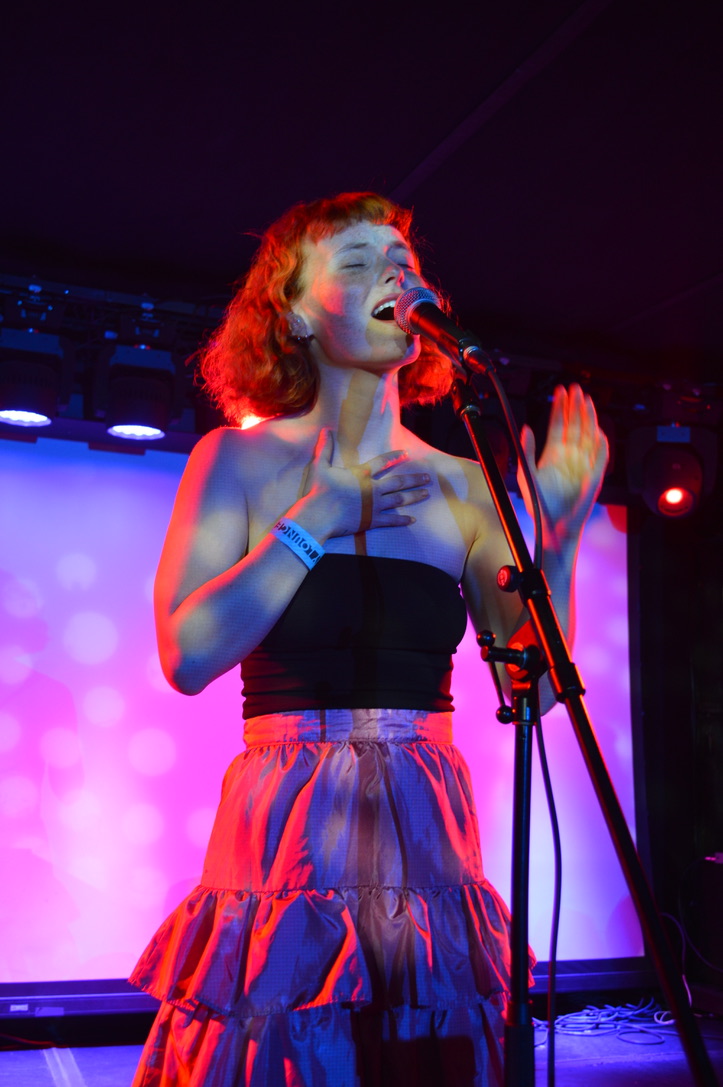 We caught dream-pop singer Kacy Hill at Mercury Lounge in the Lower East Side on Sunday evening for a sold out show, where she played songs from her new album Simple, Sweet, and Smiling, as well as some fan favorites off her 2020 record Is It Selfish If We Talk About Me Again?. Her songs blend together minimalism and electronica to create a unique, magical sound that listeners can dance, cry, and sing along to.

Simple, Sweet, and Smiling was recorded by Hill using a set-up in her own home, a stark contrast from her previous albums made in scheduled sessions at studios. In doing so, she was able to work when she was inspired and use music as a therapeutic outlet for expressing feelings around relationships, family, depression and anxiety. Hill struggles with agoraphobia, a panic disorder associated with the fear of public places and social situations, which resurfaced significantly when she started working on the album. Her songs on this new record tackle feeling powerless against your own mind and impermanence, and explore adulthood and the complex relationships that come with it. Simple, Sweet, and Smiling is genuine, ambitious and emotive. It encapsulates her desire to be “simpler” and make heavy hardships feel lighter, but also her gratitude for the easier and rewarding moments that come despite challenging times. “The idea was that I would prefer to just be this simple, sweet, and smiling kind of easy person. Especially in a relationship or partnership, I don’t want to be this dark cloud. I think it became this kind of aspirational identity, like the persona that I wish I was more of,” said Hill in an interview with Ones to Watch.

Due to her experiences with panic attacks and severe anxiety while touring, Hill had to cancel three shows earlier this month. Between recording a new album and then immediately heading on tour, she’s had a busy few months. In an Instagram statement on November 10th, she wrote, “I truly live and breathe this and want nothing more than to make music for many years to come and play it for you every night. I’ll be ok but I need a moment to take care of myself and feel a little more normal. Love you all.” We for one appreciate her candidness on such difficult experiences, and admire her ability to take a step back and prioritize her mental health. Her comments on the post were also flooded with followers supporting her decision and sending love her way.

At Mercury Lounge, Hill kicked off the night with “I Couldn’t Wait”, the elegant first track on Simple, Sweet, and Smiling, before moving into the title-track. After an enchanting first half of her set, Hill introduced a song off her last album by telling the crowd, “A lot of it’s about anxiety, so holler if you’ve got anxiety!” to which fans cheered back in response. Hill herself raised her hand and cracked a smile before going into the song, reminding us of how we can find connection to one another through live music and emotional release in hearing a song that resonates just right. Or, at least giving us a chance to feel lighter for a moment together in the midst of all our own worries.

Hill’s kindness radiated off the stage, making it a welcoming and enjoyable performance. Her raw talent allows her vocals to sound seemingly effortless against synthetic beats. She finished her set with “Can We”, encouraging the crowd to dance the night out together. There were faint encore chants after she walked off stage, but people eventually made their way out the door, all buzzing from an incredible performance from Hill.

Hill was joined by Jonah Mutono, who joked that his music was “sad” thematically in contrast to Hill’s pop persona. Nonetheless, he put on an incredible set, and will be opening for Hill for the rest of her shows this month. You can view the remaining dates on her Simple, Sweet, and Selfish Tour here.